Stamps, Stickers and Stigmata. A Social Practice of Antisemitism Presented in a Slide-show

Antisemitic stickers were disseminated in Germany from the 1880s/1890s onwards. They were glued on letters or postcards, placed visibly in public space or collected in the private sphere. In rethinking antisemitism as a social practice, these stickers, stamps and adhesive labels can be seen as a prototypical source demonstrating the performative dimension of antisemtism. The antisemitic movement used various media such as leaflets, cartoons, speeches, historical novels, articles or newspapers to mobilize people and to build up a community. Condensing an antisemitic world view in a small format is one distinctive aspect of the stickers. Another is the adhesive reverse which contains a strong unuttered message: Glue me! Disseminate me! From the last third of the 19th century onwards, antisemitic stamps and stickers could be produced easily, cheaply and fast. Yet elaborate stickers were also produced, imitating governmental insignias to coin an antisemitic iconography. Strong organization was unnecessary in printing and disseminating this flexible but lasting medium. It allowed the heterogeneous and fragmented antisemitic movement to demonstrate presence in the public realm, to permeate the population with anti-Jewish ideas, to establish slogans and to entrench an everyday practice of exclusion in the political culture. Various – quite modern – communicational strategies such as direct mailing, incorporation in the world of consumption and the use of public space were applied. The “Centralverein deutscher Staatsbürger jüdischen Glaubens” (Central Association of German Citizens of Jewish Faith, founded in 1883) reported about legal steps against the dissemination and the associated juridical difficulties.1 In the following, stickers and stamps from the extensive private collection from Wolfgang Haney are presented. From the published edition,2 stickers produced and disseminated between 1880 and 1914 were selected and annotated. The medium was not only used by antisemites. Some examples use the practice in order to combat antisemitism with the same medium.
[1]  See Im deutschen Reich (1896) 10, 2, S. 522.
[2] Alltagskultur des Antisemitismus im Kleinformat. Vignetten der Sammlung Wolfgang Haney ab 1880, eds. Isabel Enzenbach, Wolfgang Haney, (Berlin: Metropol Verlag, 2012).
Fig. 1

“Liebesgabe zum Antisemitischen Agitationsfond” is a stamp proving payment of fees (Beitragsmarke) produced by the entourage of Wilhelm Marr and Ernst Schmeitzner, around 1880. Producing stamps and using sovereign signs was for the fragmented antisemitic movement a mean to appear publicly as an authority. The price of the stamp is stated to be a “gift of love” (Liebesgabe) for a fund for antisemitic agitation. 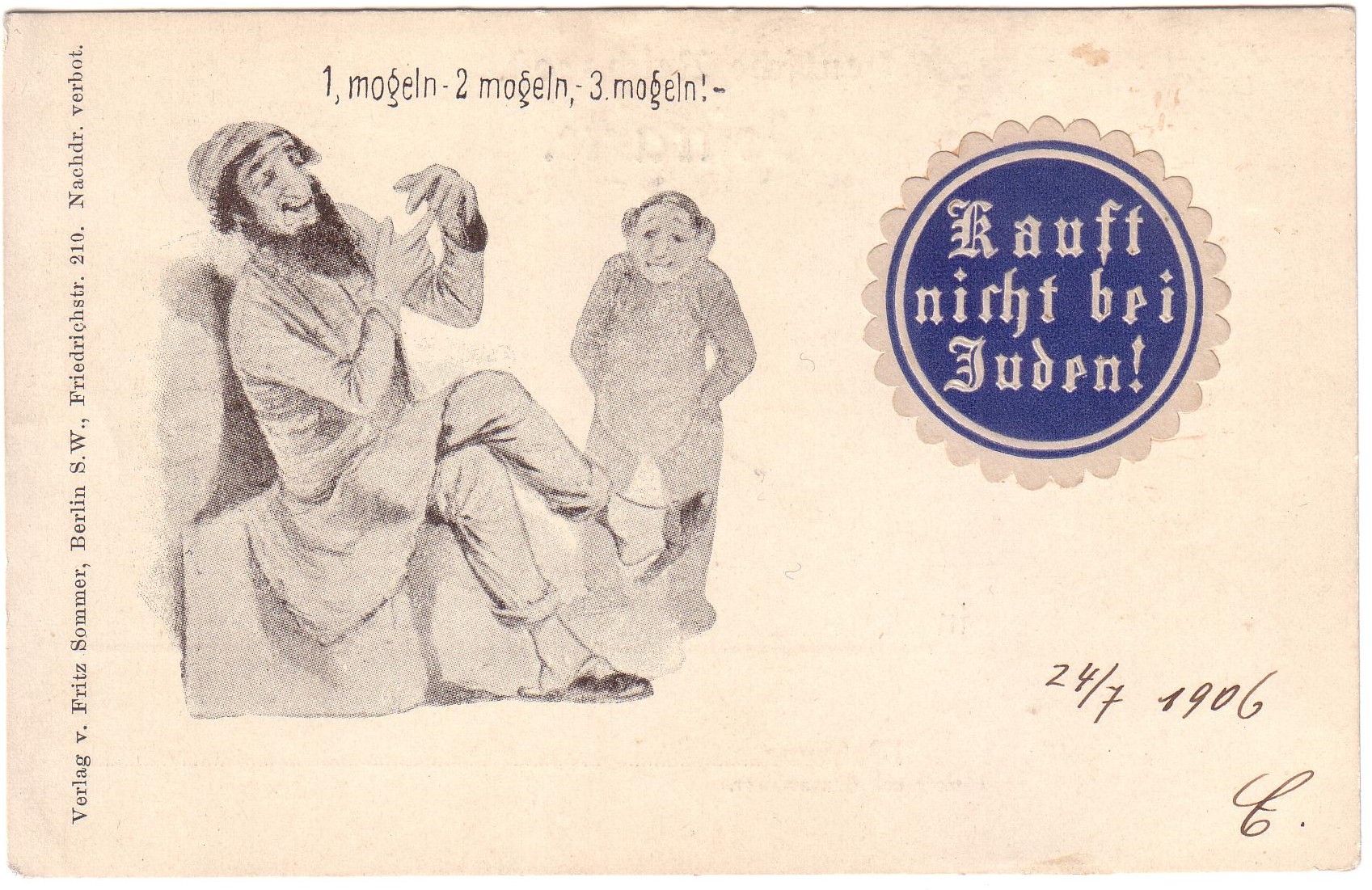 From the 1890s onwards stickers with the slogan “Don’t buy from Jews” designed like official seals were disseminated on letters and in the public sphere. The „Centralverein deutscher Staatsbürger jüdischen Glaubens“ reported about these stamps seen in Leipzig and Aschaffenburg (Bavaria). 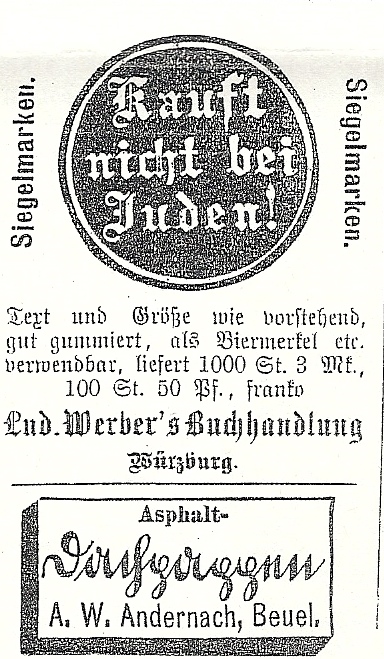 A small classified advertisement (in “Deutsch-Soziale Blätter” 1896) promoted stamps availble in sheets with 100 or 1000 pieces. In Berlin a museum director noticed in 1893: “I found small red stickers (with the slogan “Don’t buy from Jews”) glued on the wall in several compartments of the urban railway between the stations Zoologischer Garten and Börse in March at 8 o’clock a.m.” 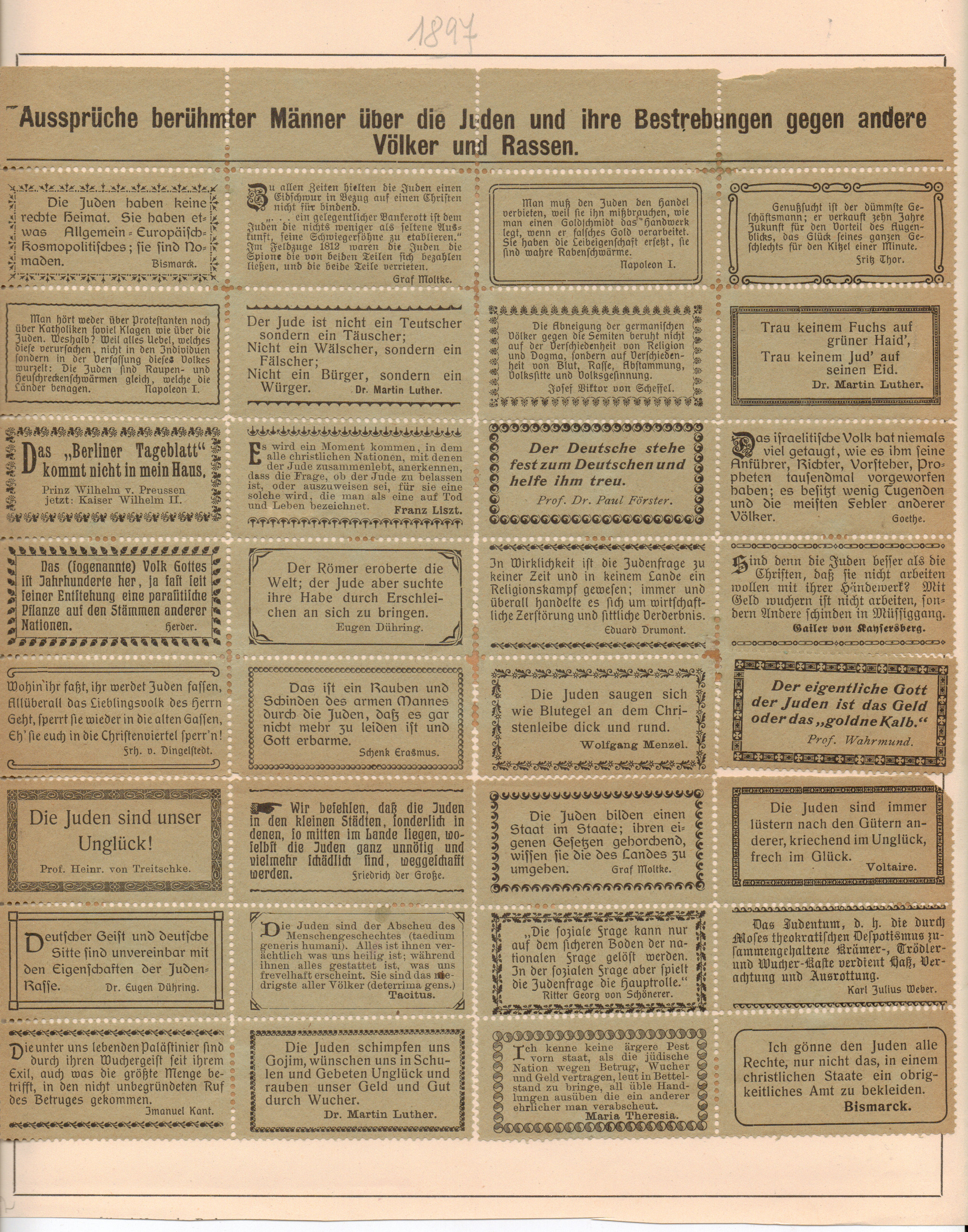 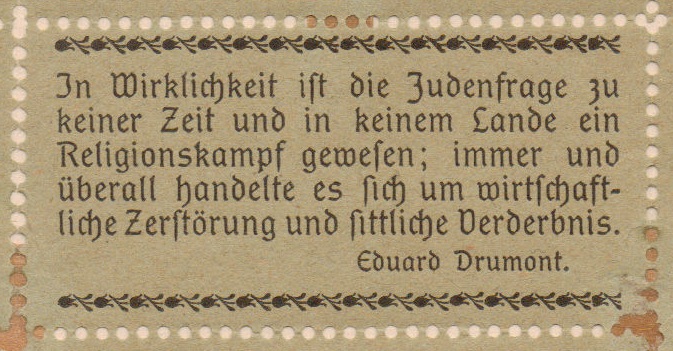 A 32-stamp sheet with “Quotes from famous men about Jews”. The quotes are extracts from Theodor Fritsch's book “Anti-Semitic Catechism” intended to decorate letters and postcards, around 1897. 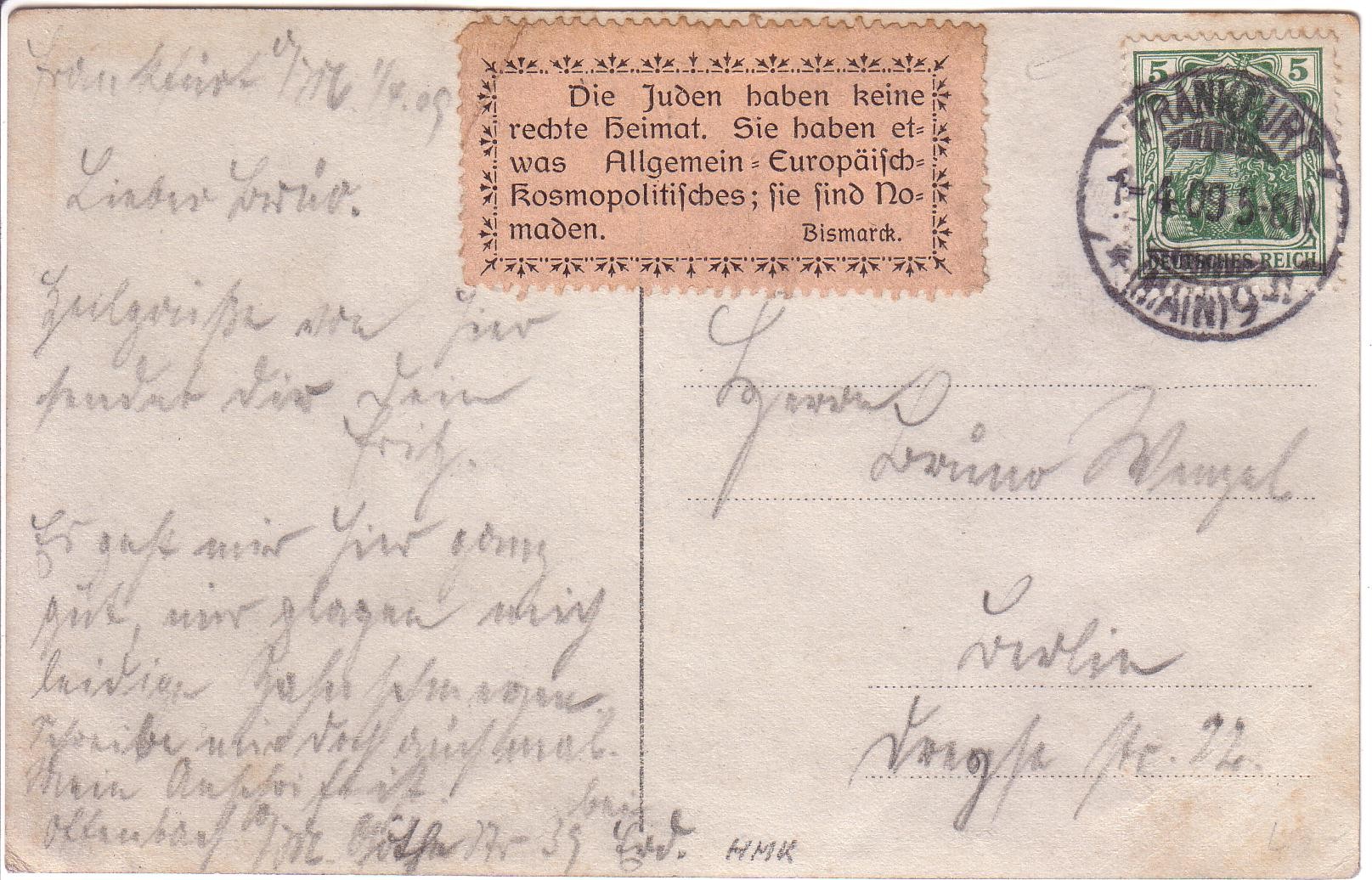 Postcard with a letter decoration stamp (Briefverschlussmarke) quoting Bismarck: “Jews don’t have a homeland. They are somehow generally-European cosmopolitan. They are nomads.” The postcard was stamped in Frankfurt in 1909. 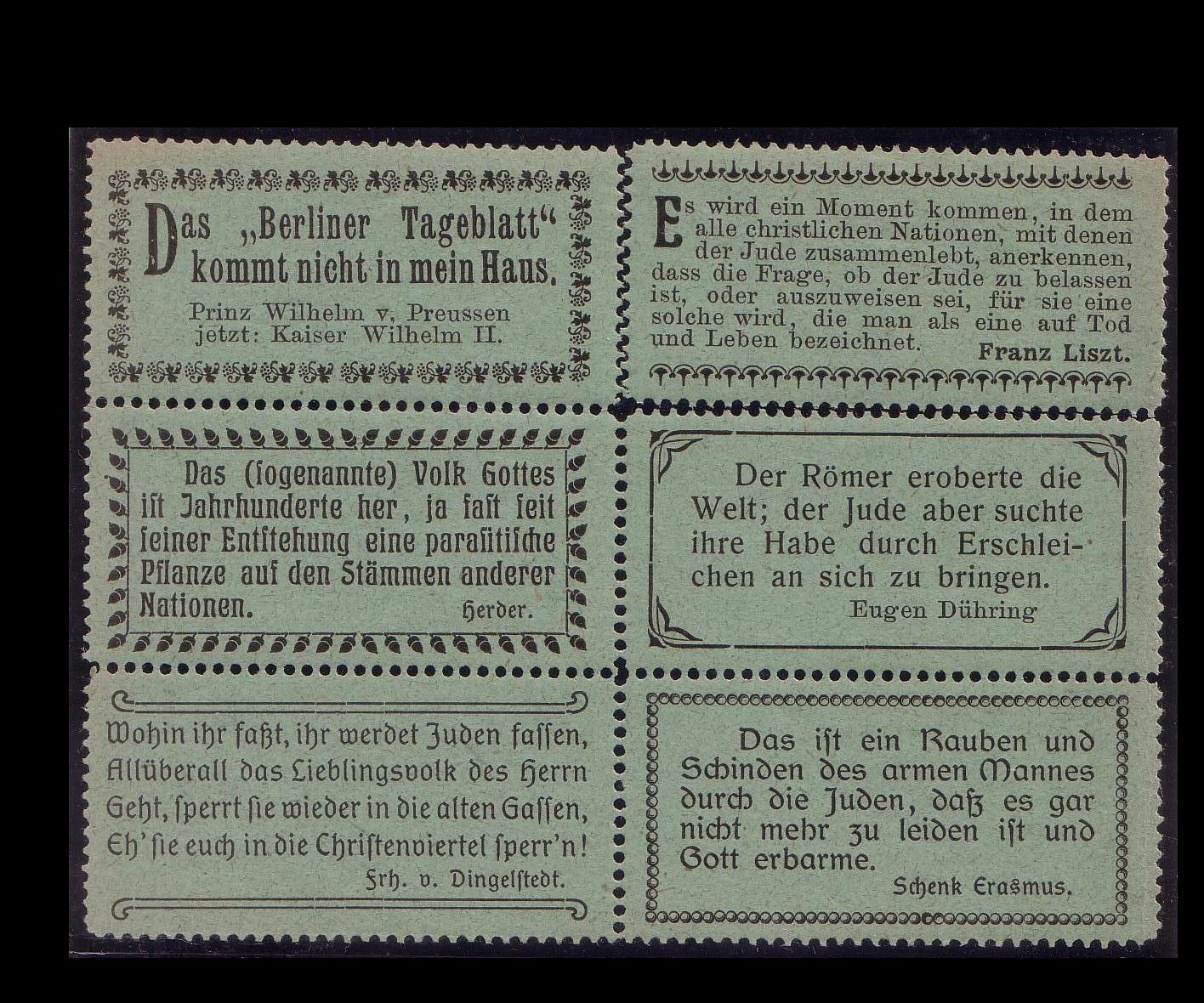 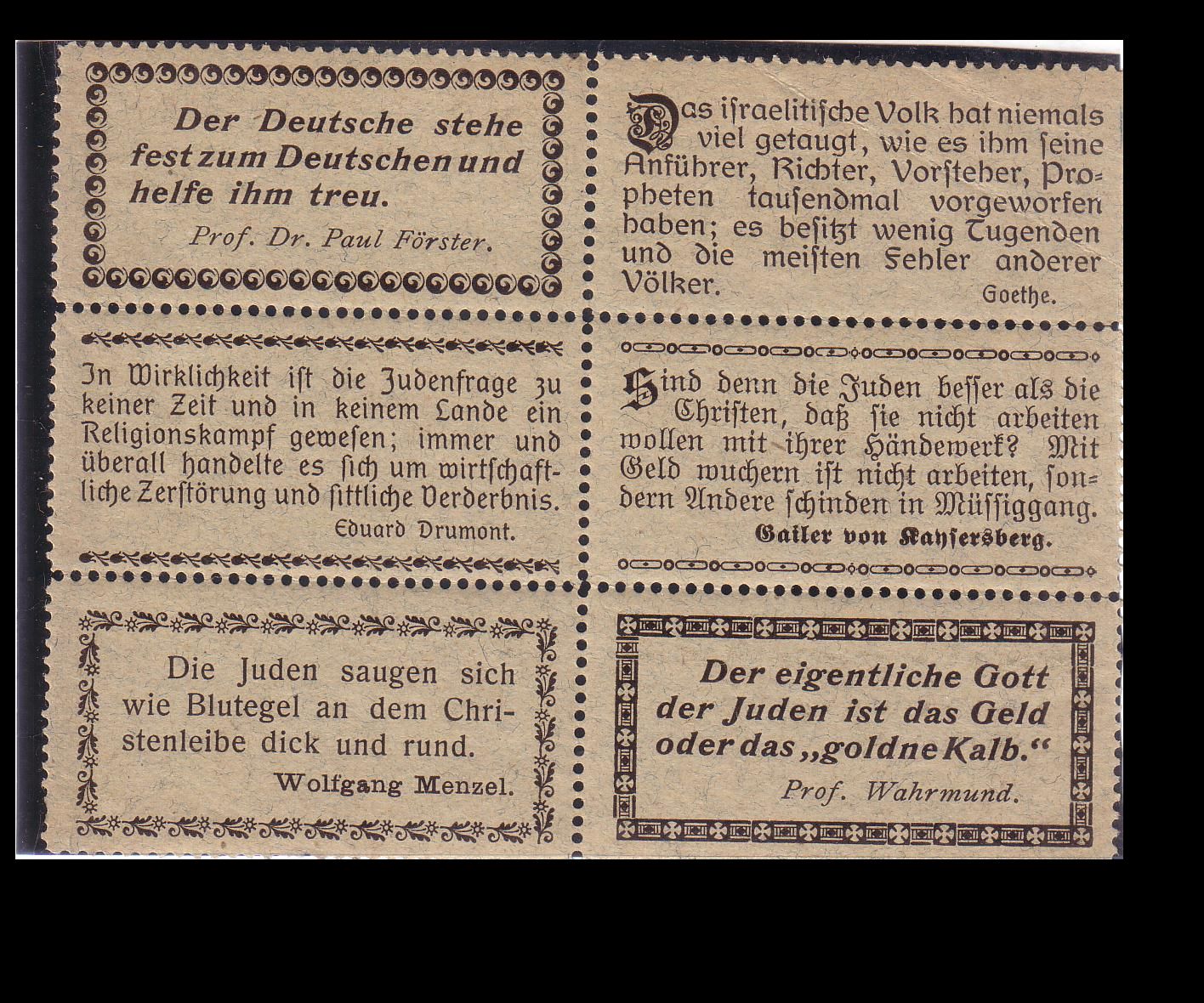 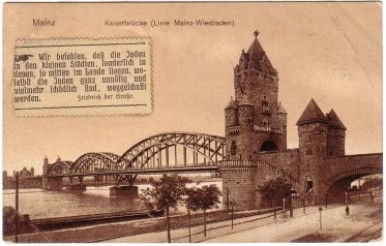 The decorating stamps used quotes from famous authorities to legitimize antisemitism. Some sayings were quoted out of context or incorrectly as on this example using Friedrich II. Another technique was to quote Jewish authors or authorities such as Theodor Mommsen, who organzied liberal resistance against antisemitism. This card was stamped in Rheinhessen in 1911. 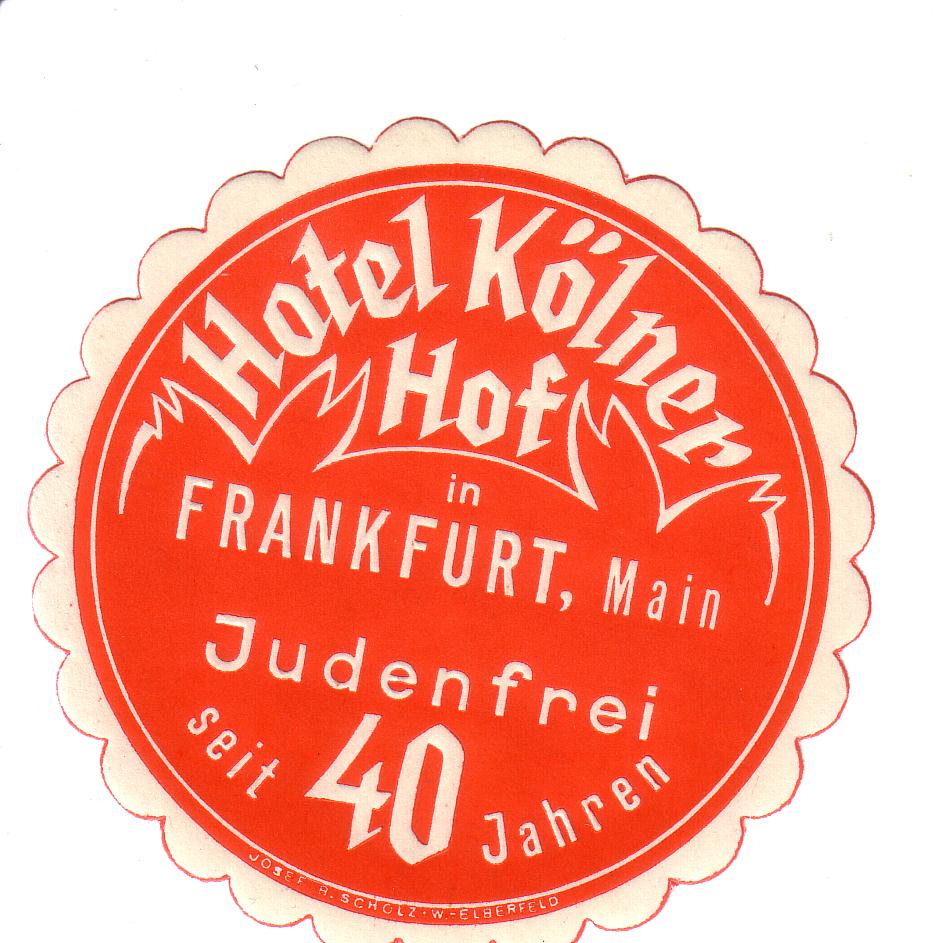 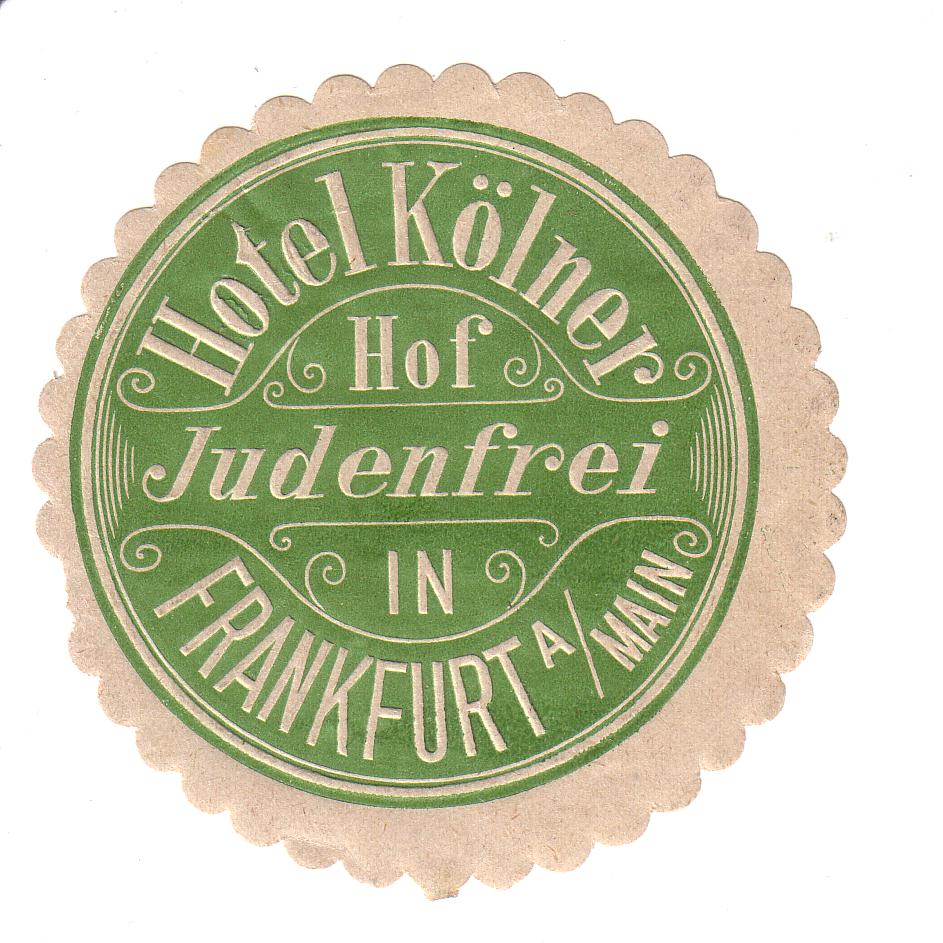 The Frankfurt Hotel “Kölner Hof” barred Jews since 1895 and advertises itself as the “only Jew-free hotel” in the city. From 1895 till 1914 it used a varity of antisemitic media and created an own mixture of advertising and propaganda. This specifically designed seal exists in different variants, the green one is probably around1900, the red seal was realeased around 1935 as a jubilee edition “Judenfrei seit 40 Jahren”. 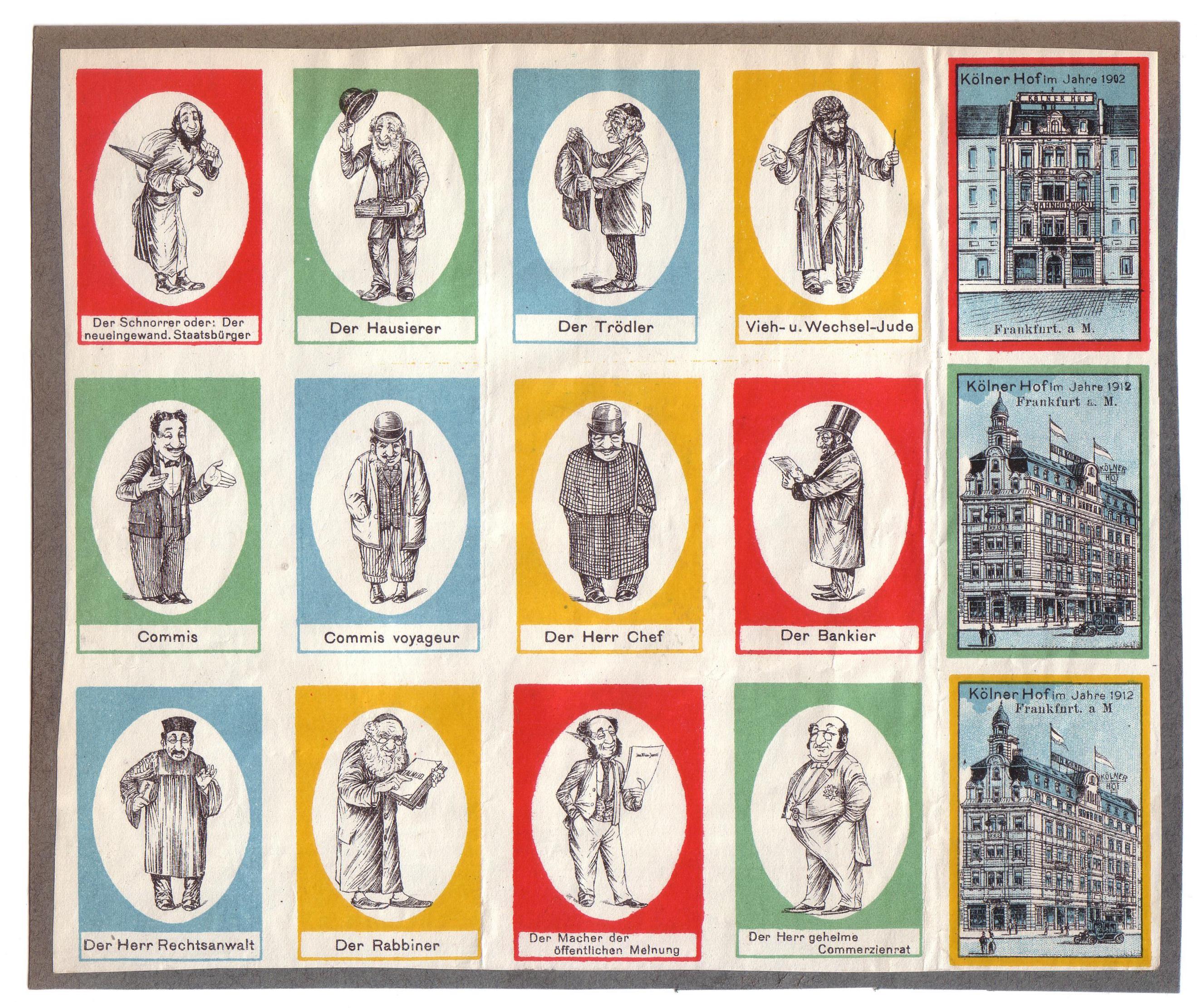 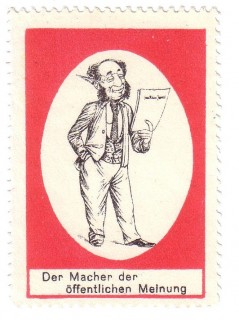 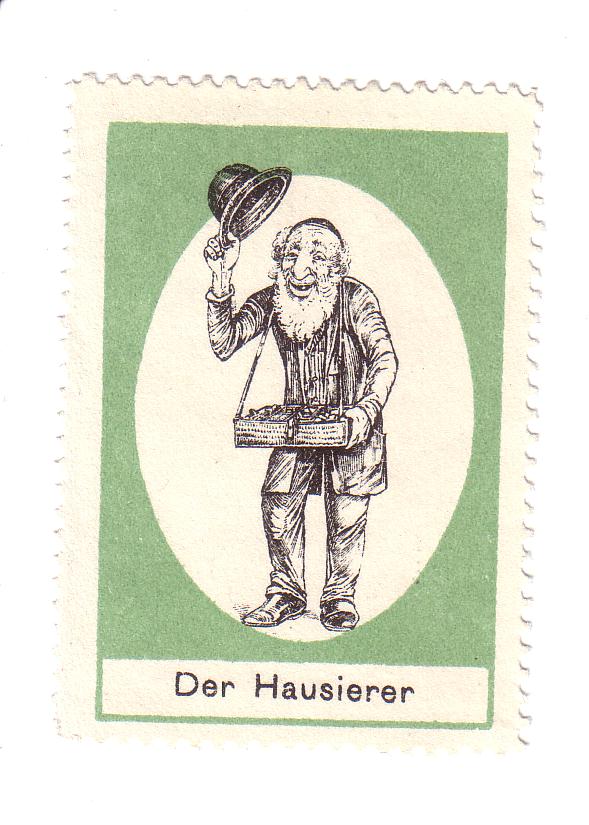 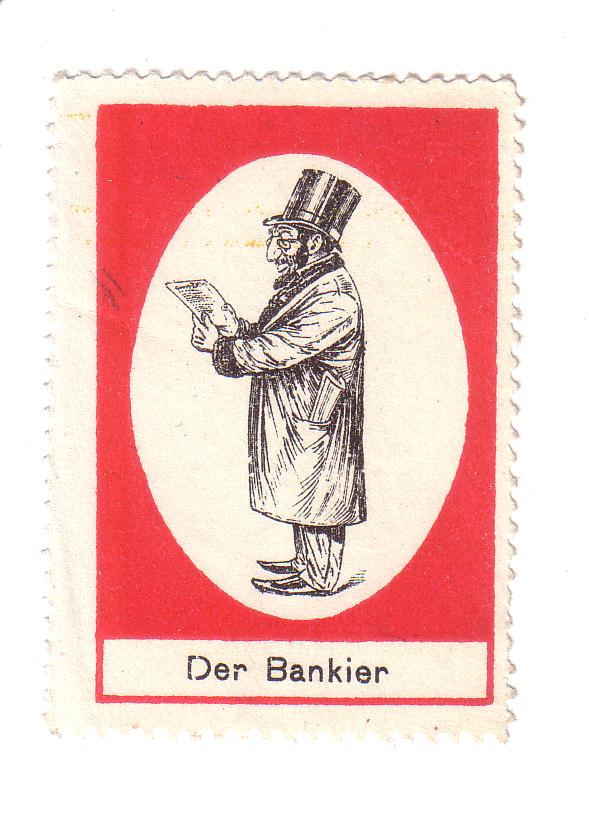 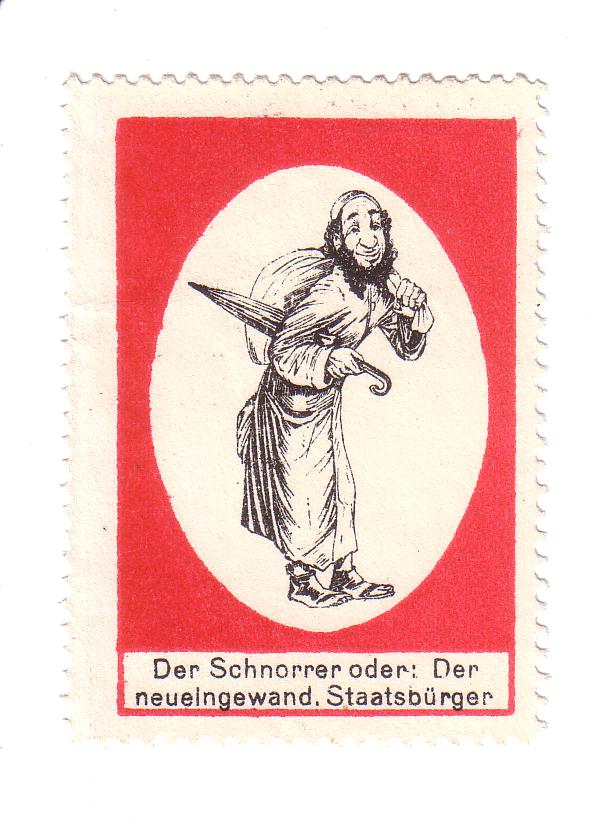 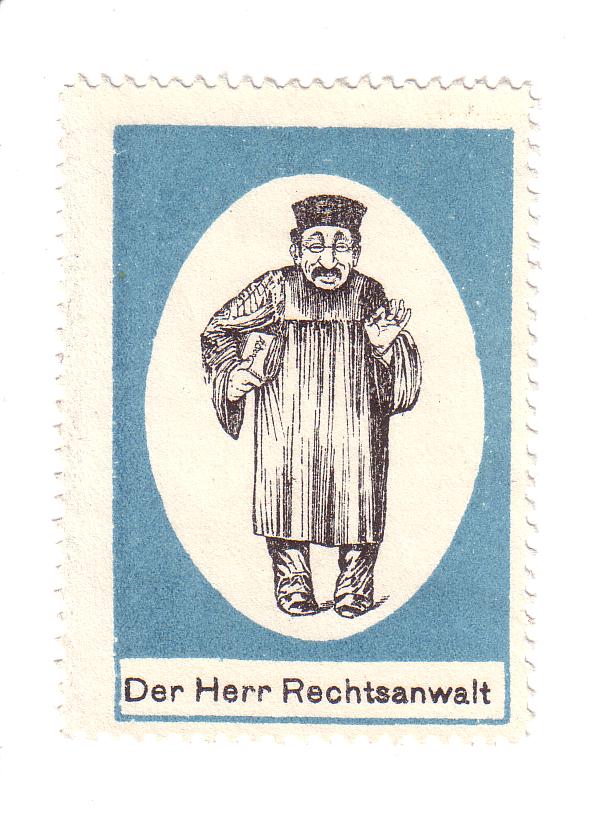 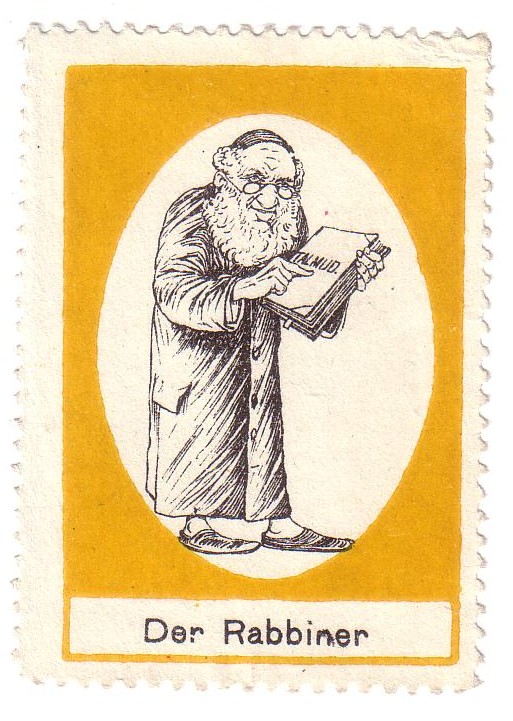 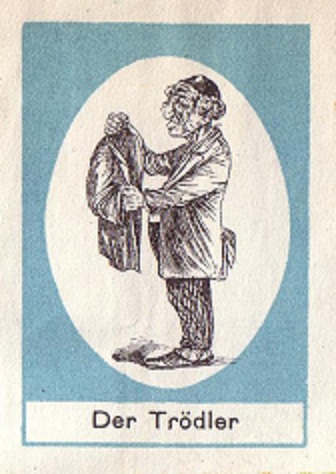 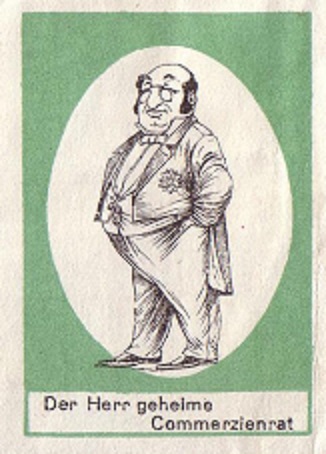 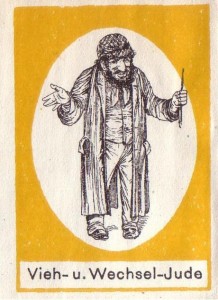 In the tradition of the very popular picture sheets from the 19th century the Kölner Hof issued in 1912 a sheet with collection stamps (without franking). The collection consisted of twelve caricatures showing an anti-semitic group of figures such as “the scrounger or new immigrant citizen”, “peddler”, “rabbi”, “lawyer“ or “banker”. 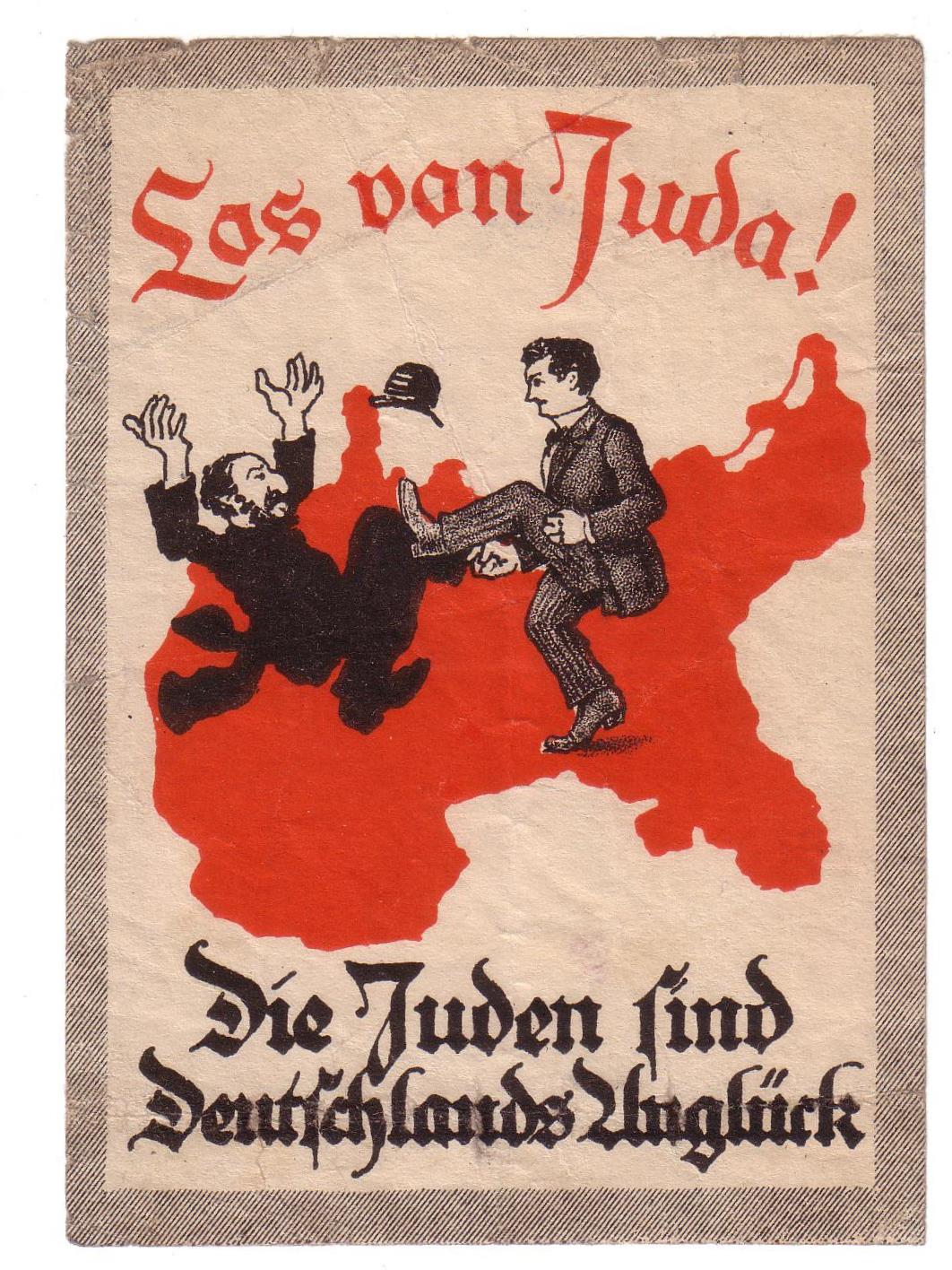 The “volkish” movement used for its propaganda among other media small adhesive labels. The slogan Los von Juda [Away from Juda] derived from the Austrian movement Los-von-Rom-Bewegung  [Away from Rome!] which aimed at the incorporation of an Austria, freed from the Pope, into Germany. The label combines two anti-Semitic catch phrases with a map of a Greater German Reich and a pictorial incitement to throw Jews out of the country. 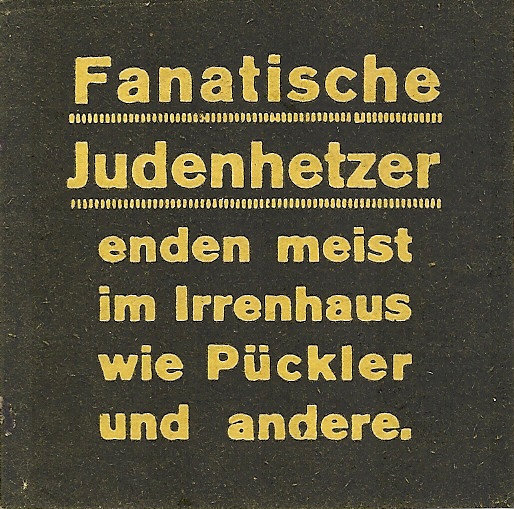 Even Ant-Antisemites used this medium. This sticker says: “Fanatical Jew-baiters mostly end in the madhouse like Pückler and others”. Graf Walter Pückler-Klein was an infamous antisemitic agitator. In 1908 he was committed to a psychiatric institution. Probably the label dates from the same time. 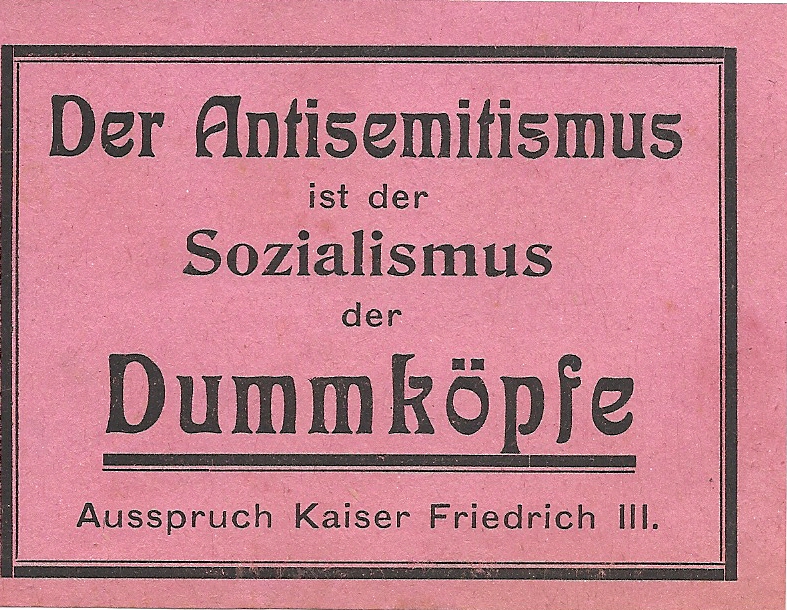 The well-known socialist slogan “Antisemitism is the socialism of fools” is on this sticker attributed to the liberal German Emporer Friedrich III who was German Emperor and King of Prussia in 1888. It is imaginable that the label was issued in the social environment of the Centralverein deutscher Staatsbürger jüdischen Glaubens. Original size of the label: 7,6 x 6 cm